Third Time’s the Charm for this Capable Cyberdeck 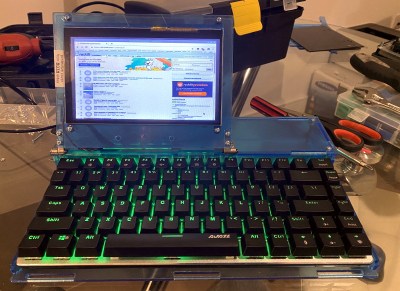 For those who decide to build their own personal cyberdeck, it’s often as much about the journey as it is the final product. The recent write-up that [mickwheelz] put together about the process that lead him to build his own bespoke mobile computer is a perfect example. He went through three distinct design phases to create something that had what he describes as a “retro-futuristic, hand-built, utilitarian aesthetic”, and we think you’ll agree the final product is right on target.

At Hackaday we’re strong believers that you can learn just as much from a failed attempt as you will from a rousing success, which is why we especially appreciate the way [mickwheelz] has documented this project. The basic layout and general bill of materials for his hypothetical cyberdeck had been sorted out in his head for about a year, but it took a few attempts until everything came together in a way he was happy with. Rather than pretend those early missteps never happened, he’s decided to present each one and explain why it didn’t quite work out.

Frankly both of his earlier attempts look pretty slick to us, but of course the only person who’s opinion really counts when it comes to a good cyberdeck is the one who’s building it. The original acrylic design was a bit too fiddly, and while his first attempt at 3D printing the computer’s frame and enclosure went much better, it still left something to be desired.

The final result is a clean and straightforward design that has plenty of room inside for a Raspberry Pi 4, UPSPack V3 power management board, 10,000 mAh battery, internal USB hub, and a AK33 mechanical keyboard. Topside there’s a 7” 1024×600 IPS LCD with touch overlay that’s naturally been offset in the traditional cyberdeck style, and on the right side of the enclosure there’s a bay that holds a KKMoon RTL-SDR. Though that could certainly be swapped out for something else should you decide to print out your own version of this Creative Commons licensed design.

In our 2020 review we noted the incredible influx of cyberdeck builds we’d seen over the last 12 months, and judging by just what we’ve seen in just these last few weeks, 2021 should be another bumper year for these unique computers.