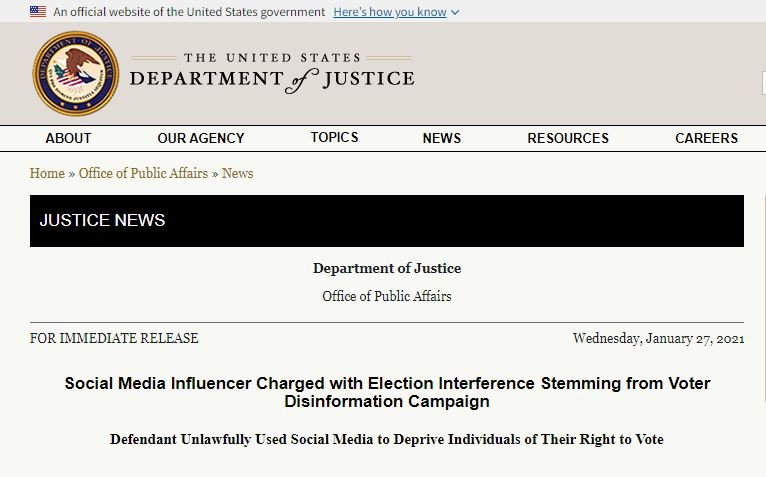 This is an unprecedented case, since the authorities allege that the defendant, considered a social media “influencer”, used these platforms with the intention of spreading misinformation about the electoral process. “The defendant and his co-conspirators used a social media platform to prejudice the right to vote, one of the basic rights guaranteed by our Constitution,” Deputy Attorney General Nicholas L. McQuaid said. “This case endorses the DOJ’s commitment to criminally investigate and prosecute those who want to harm this elementary right,” he adds.

According to the DOJ, in 2016 Mackey had about 58,000 followers on Twitter, which placed him as one of the most powerful influencers on electoral issues, even above Twitter accounts operated by major media chains and public figures such as Stephen Colbert.

Taking advantage of his privileged status on the social network, months later the defendant pushed for a conspiracy with the aim of using social media to disseminate intentionally false information, trying to get supporters of a presidential candidate to vote through text messages or social media, something that is not allowed in U.S. electoral law.

“For example, on November 1st, Mackey posted on Twitter an image showing an African-American woman standing in front of a sign that read <<African Americans for (candidate’s name)>>. The image included a text inviting citizens to vote from home texting 59925,” says the DOJ.

The tweet included hashtags relating to the election and election campaign of the not-mentioned candidate. The authorities mention that, on Election Day, about 5,000 phone users texted the above-mentioned number believing that their vote would be valid, when in fact they were communicating to SMS platforms controlled by Mackey and his accomplices.

Although he will be considered innocent for the time being until proven otherwise, prosecutors are ready to file multiple conspiracy charges against Mackey.

Finally, Prosecutor McQuaid concluded: “There is no place in public discussion for this kind of practice. This individual’s arrest is a clear message to anyone who wants to use digital platforms to spread misinformation about the basic rights of U.S. citizens.”