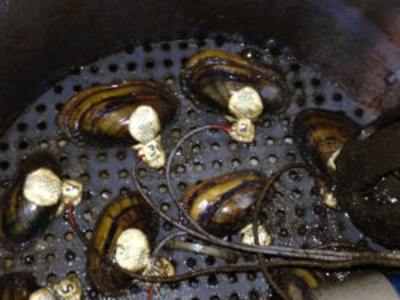 Sensors aren’t just limited to the electrical, mechanical, or chemical realm. Up until 1986, canaries were used as Carbon Monoxide detectors, and food tasters are still used by some heads of state. These so-called sentinel species have been known and used for decades if not centuries. But recent projects using clams to detect water pollution are providing real-time electronic feedback. They are using the species Actinonaias ligamentina, which, as you no doubt recall, was declared “Mussel of the Month” by the University of Wisconsin’s MUSSEL Project back in January 2010. They are more commonly known as mucket clams or mucket mussels, and are particularly sensitive to water pollution — they will clam-up, so to speak, in the presence of contaminated water.

Several municipalities along the Mississippi River installed clam-based sensors back in 2015, and another system was installed in the Anacostia River Estuary in 2011. Polish director Julia Pekla produced a documentary about the clam-based sensors installed at the Dębiec Water Treatment Plant on the Wisła River near Warsaw which has been in operation since 1994. Her documentary is titled “Gruba Kaśka (Fat Kathy)” and won the In Vivo Award at the 2020 Imagine Science Film’s 13th annual film festival (see trailer below).

As shown in the lead photo, a simple electrical contact is mounted on each clam, which closes a circuit with the base contact when the shell is clamped shut. The systems along the Mississippi River use multiple clams, 11 in Minneapolis Minnesota and 16 in Moline Illinois. The system in Poland uses eight clams — when four or more clams are in agreement the system automatically shuts down and alerts the operators. These clams only work for three months, after which they are put into retirement with a mark so they won’t be required to serve again.

We’ve written about a clam-shaped underwater sensor before, and also reported on the potential of using clams as batteries. This biological sensing technique came to our attention via [Embedded FM podcast #357].