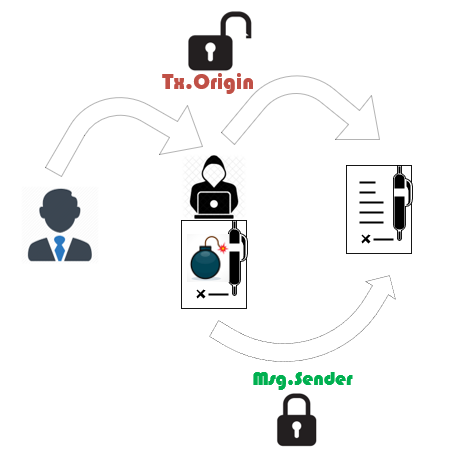 Authorization on a smart contract can sometimes be a tricky endeavor. There are many things that are easily coded incorrectly, for example public functions, unpublished functions, delegate calls and tx.origin validations. If any of these are implemented incorrectly, then contracts are often left vulnerable to both direct and indirect attacks.

In this case, we will be talking about tx.origin which is an indirect attack method an attacker can utilize to bypass authorization based on the nuance of what is actually checked vs what the developer may think is checked when implementing require statements with tx.origin for authorization.

There are two different ways to check the address of who is making a call to a contract.

While both of these could produce the same output when directly calling a contract, they may differ when there is another contract in the middle of the transaction. For example, if you play an online game which calls another contract to handle a payout transaction. When using a check with msg.sender, the winning payout would go to the games address that called the payout contract.

If the same address was checked with tx.origin on the payout contract, it would go all the way back to the original users address that processed the payout transaction on the game rather than the game contract making the call.

Man In the Middle Via tx.origin

This type of check is often misused when checking validation for authorization on smart contracts. When a tx.Origin check is used instead of msg.sender, this can leave a contract open to a man-in-the-middle (MITM) attack vector. Let’s take a look at a visual representation of an attack, which will help put this into perspective. Then we will look at some code that implements this functionality.

In the below image we have:

ü  A user on the left

ü  An attacker’s contract in the middle

ü  A target contract on the right

This attack could be used to liquidate a user’s account with a transfer function from the authorized user to the attacker’s account. Or accessing forbidden functionality such as a Self-Destruct function linked to administrator only validation, or perhaps updating admin functionality to provide the attacker with full access to the contract. Much like social engineering in a standard network penetration test, this could be a wide scale phishing campaign to effect all standard users, or a spear phishing attack targeting an administrative user.

Regardless of the motivations of the attacker, there are many bad things that can happen. So let’s take a look at a very simple example of tx.origin just so you see the difference between msg.sender and tx.origin.  We want to make sure you fully understand how this functionality is actually working so you can spot it during your testing before we exploit it.

ü  Type out the following 2 contracts into Remix

The code above for HelloWorldTXOrigin is extremely simple. All the code does is set a variable on lines 6 and 11 to the address calling the function and returns the value.  On line 6 it uses the tx.origin value and on line 11 it uses the msg.sender.

Now take a look at the following contract which calls the above contract to illustrate the difference between msg.sender and tx.origin values.

The Call_Hello contract above calls the HelloWorld contract via an interface defined on line 3 and initialized to a variable named helloInterface on line 9.

All this contract does is call functions from HelloWorld on lines 12 and 16 and returns the address values of tx.sender or msg.sender. Presumably this would be a random user that you social engineered into using this contract.

ü  Copy the address of the HelloWorldTXOrigin.sol contract

ü  After each is pressed review the transaction output address and walk through in your head what you are reviewing before moving on.

If you performed the above action steps you would notice something similar to the following. First, I deploy my target contract with account one, which got deployed to the address:

Next I click the myTX button which should return the victims address from the 3rdaccount as the tx.origin check returns the original calling account of the user, not the attackers contract making the call. Indeed, this is true, shown below, the victims contract address is returned when validated with tx.origin.

I hope that clears up any confusion as to the difference between both msg.sender and tx.origin.  We will now take a look at a more comprehensive example with a bit of vulnerable code to put this into context and show how to bypass some controls using this attack method.

ü  Review this code prior to reading the explanation.

ü  What is wrong with the logic in this contract?

ü  What would your path of exploitation be?

ü  What would the impact of this attack be?

Also note that there is a kill function at line 25 using Solidity’s built-in self-destruct function. This function will destroy the contract making it unusable and send any remaining contract ether to the address specified. This function is using authorization checks against the owner via the msg.sender rather than the tx.origin.

Action steps to familiarize yourself with the contract:

ü  Type the code above into Remix and deploy it

ü  Deposit the 10 ether with the deposit function.

ü  Try the same thing with the original account

Now that we are familiar with the contracts functionality and we know that it is dangerously checking authorization using tx.origin  on both the transferTo and changeOwner functions. What would we do to attack this?

In order to formulate an attack, we will use a standard phishing style attack via social engineering. Exactly the same as if we were contracted to perform social engineering on a penetration test, however the malicious site that we send our victim communicates with our malicious smart contract on the backend as a proxy into the vulnerable contract for example using a decentralized web application (DAP) that makes web3.js calls. We used web3.js calls in an earlier chapter when directly making calls to a contract.

How we attack this would depend on our motivations as an attacker. We could simply trick the contract owner into running functionality on our malicious contract which then transfers all of the funds out of the contract to the attacker’s wallet. The owner may not even notice this attack took place until he had issues with account balances. He may not even realize when and how it happened depending on how you orchestrate your attack. We could also take control of the whole contract and become the owner of the contract which would provide us with unfettered access to sensitive functionality at any time.

Let’s take a look at a malicious smart contract that could transfer out all of the funds and additionally give use full administrative control of the contract. Generally, in a live attack scenario we would code a pretty looking DAP page around this attacker’s contract with Web3.js much like in a phishing engagement.

Most of this contract above is setting up the target interface, so this should be pretty easy to follow if you read through the section on Reentrancy where we setup an interface in our attacking contract.  But just to review an interface is a way that we can call functions from another contract via its address and function names. For example, on lines 3-6 we create an interface and simply copy paste the function definitions from our target contract into our interface definition. That’s it.  And then we take that target interface we created and point it at the address of the target contract on line 16 with the name bankInterface. That is really the only thing we are doing for 75% of this contract. Nothing new or scary.

At this point we can use the bankInterface variable to access functionality within the target contract from our attacking contract.  Pretty simple right?

Now the actual meat of this attacking contract is within lines 18-20 where we have a test function which calls the transferTo and changeOwner functions we do not have access to as a non-owner.

Now as before with your attacker’s account you cannot run functionality which performs authorization checks because the attackers address is not the owner, so running this test function which changes the owner and sends 1 ether will not work from the second account.  However, instead of our attacker running this functionality directly, the attacker would phish the Owner located on account one. The phish would use the attacker’s contract which would perform the actions as the owner due to the incorrect check using tx.origin.

ü  Run the test function from the attacker’s contract with account 1.

ü  Now try to use that send function again. Did it work?

ü  Try to use the kill function. Did that work?

ü  Now switch to the attackers account and use the send function. Did that work this time?

ü  Now kill the contract from the attackers account. What happened?

So, what happened when you used the test function from the attacker’s contract?

Even with the phishing contract if we were to call the kill function from the attacker’s contract it would have failed because it uses the msg.sender. So, in order to execute kill, we had to use changeOwner and become the owner of the contract prior to calling the kill function.

As a result of phishing the owner into using the attacker’s contract, the attacker is now the owner of this target contract. As such, the attacker actually can call the kill function directly without any issues and the original owner has been locked out of administrative functionality.

Now in real life we, have a couple different options for attacking this user via a phishing attack over chat, email or even the phone.

I hope all of this makes sense. If you got stuck at any point during this walkthrough make sure to check out the video for a walkthrough of the lab and additional attack options.

Github code for this chapter:  https://github.com/cclabsInc/BlockChainExploitation/tree/master/2020_BlockchainFreeCourse/Tx.Origin