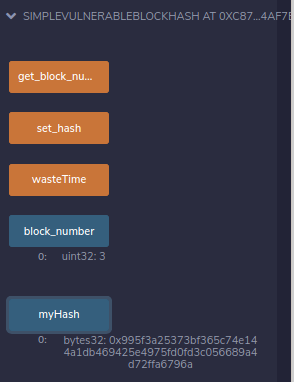 This is our final free chapter in this smart contract hacking series, hopefully you enjoyed it, I am not sure what I am going to work on next, perhaps some malware analysis, reverse engineering or maybe some hacking in the cloud.

We are currently in 4th quarter and slammed with work so I wouldn’t expect any more posts or the full blockchain release till after that eases up.

If you have any questions or comments you can hit us up at:

Within operations that require random values we generally need a form of randomness coupled with our algorithm. If we do not have sufficient randomness and large character sets, we would end up with cryptographic collisions or predictable values depending what we are doing. This Is often the case in video game operations and data security encryption schemes. For example, we do not want to create random values which are predictable and repeatable based on known values or controllable values. With controllable values an attacker could duplicate the value by reverse engineering how it was originally created and what that random seed is. Also, If the value is predictable within a game, we may be able to cheat the game by creating our own valid values that exploit the perceived randomness.

Now we are not going to deep dive into cracking cryptography or brute forcing hash values. First off it takes too much time and effort. Secondly because there are easier more efficient ways of tackling cryptographic issues. Lastly, we do not have time for rabbit holes in a week-long penetration test that require us to explore many other attack vectors. Wasting a whole week on cracking a single cryptographic issue would be a terrible and inefficient penetration test leaving the rest of the target vulnerable. This may be suitable for R&D or a CTF but not for a penetration test.

What you need to understand is that certain functions often used as randomness on the blockchain is not suitable as a source of randomness. Additionally, understanding how things are implemented will get you much farther when it comes to cryptography then attacking it directly. You do not need to break NSA level encryption by attacking it directly. Instead you should concentrate on finding insecure implementations of these algorithms to get what you need.

Oracle padding attacks are a great example of this if you were in the hacking community back in the late 2000s. The padding attack relied on error messages based on padding within blocks to determine a way to decrypt them. This was a brilliant attack vector as you didn’t need to understand deep cryptographic concepts to decrypt data blocks only how blocks work and how it was implemented.  With this knowledge you could leverage the flawed implementation to get the decrypted values.

On the blockchain there are a number of insecure functionality that developers like to use when implementing random values. Most of these are very bad ideas for reasons we will discuss below.

For Example, the following non-exhaustive but often used list of values are not suitable for randomness within sensitive operations. Usage of these types of values for any sort of calculation is always suspect for closer review:

Why you ask? Well regardless of the data being set as private on the blockchain a private variable storage value is 100% readable on the blockchain. There are no secret values. These can be queried as you saw in the storage issues chapter. Also embedding hard coded values are certainly not private as they are in the source code which may be posted directly on the blockchain. Or could be reverse engineered out of the bytecode used to deploy the contract when the source code is not available. If you can get a hold of that value, then you can violate the security of that functionality.

Secondly do not rely on predictable values for randomness especially from block data sources. Block timestamps are controlled by miners which can aid in orchestrated attacks when used as a source of randomness. Also block numbers are easy to query and create predictable attacks when used in calculations, if internal functions are using a block number, they are all using the same PRNG. Finally, block hash values are terrible to use for randomness as only the last 256 block hash values on chain actually have a real value. Anything older than 256 is reduced to 0 meaning that every calculation will use the same value of 0. We will cover that in some of our examples.

This is not an exhaustive list but instead just a small portion of bad decisions for random values. There are plenty of other values which could be used within calculations as a random seed which are also predictable. It is always important to review the data used in these calculations when reviewing smart contract functionality. So, without the need of a PHD in cryptography you should easily discern that all of the above implementation examples are terrible for the inclusion of random data within cryptographic operations.

Let’s start out taking a look at a simple example of using a blockhash value with a blocknumber value. While a hash of a block might seem like a good idea as a random number there are numerous issues with it. Firstly, a blocknumber is a known value set by a miner that persists for a set length of time and can be queried and used in an attacker’s similar algorithm to produce the same result and bypass controls. But there is also an underlying vulnerability to this approach when coupled with a blockchash which we will take a look at below.

ü  Open up your terminal and launch ganache-cli

ü  Type out the code below into Remix

ü  Within the Deploy Environment section dropdown change the JavaScript VM to the web3 Provider option.

Then we have a function on line 11 which takes the block number and uses it with the blockhash button to retrieve the blockhash and store it in the myHash variable.

ü  What happened and what implications would this have on calculations your using this value with?

So, we have 2 variables of a block number and a block hash associated with that block number. What’s the big deal. Well let’s walk through this step by step and then play around with the remaining wasteTime function on line 15 to find out.

Starting out if we have the deployed contract and we execute the get_block_number function followed by the set_hash function we will get the following result when checking the block_number and myHash variables.

We see the blocknumber of 3 and then a hex value representing the block hash that starts with 0x995f. Now if we were to use this hash as a random value or within some algorithm to create a random value it might work depending what we were doing and the level of security required for the length of time we need it to be perceived as random for. It wouldn’t be secure but maybe good enough for your operations.  However, a blockhash has a dark little secret a developer may not be aware of.  Block hashes in Ethereum have short term memory when it comes to blocks older than 256 from the current block.

So, what happens when we calculate a block after a time lapse? Let’s give that a try by executing the wasteTime button till we reach block 259.  Waste time sets a block value and discards it to enumerate blocks for us, it doesn’t actually make any real changes. Normally blocks on the Ethereum network enumerate on their own every 30 seconds and we would simply just wait for 256 blocks, but we don’t have traffic on our blockchain so we will enumerate it ourselves with wasteTime. 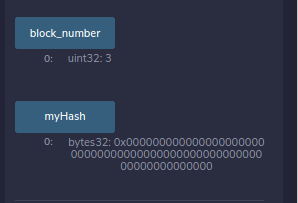 You will notice the myHash variable is now 0x000. because blocks older than 256 from the current block are not stored and result in a value of 0.  Having a predictable value of 0 in our random algorithm can very likely create a situation where it would be easy to recreate the random number to bypass or cheat functionality in the smart contract.

A classical terrible example is something similar to this.

In order to see how this would work let’s take a look at a simple game of chance that implements this concept.

ü  Type out this code within remix

ü  Try to locate the vulnerability within the code

After trying to exploit this vulnerability yourself review the following video which walks you through the code and how to exploit it.

Video Walkthrough of Attacking The Game:

The best way to prevent these issues is to avoid on chain predictable values or secret values as your seed to operations and calculations.  We can do this with trusted external Oracles.  Oracles are external data sources that your contract can use when it needs random values or trusted data.  There are projects that specifically solve this problem for example ChainLink which has networks of Oracle nodes that handle data queries and provide back trusted verified data including random numbers.  A simple example for using Chainlink for a random number is found at the following link:

It is always a good idea to avoid on chain secret data or block related information when performing any sort of sensitive operation and instead utilize an Oracle.